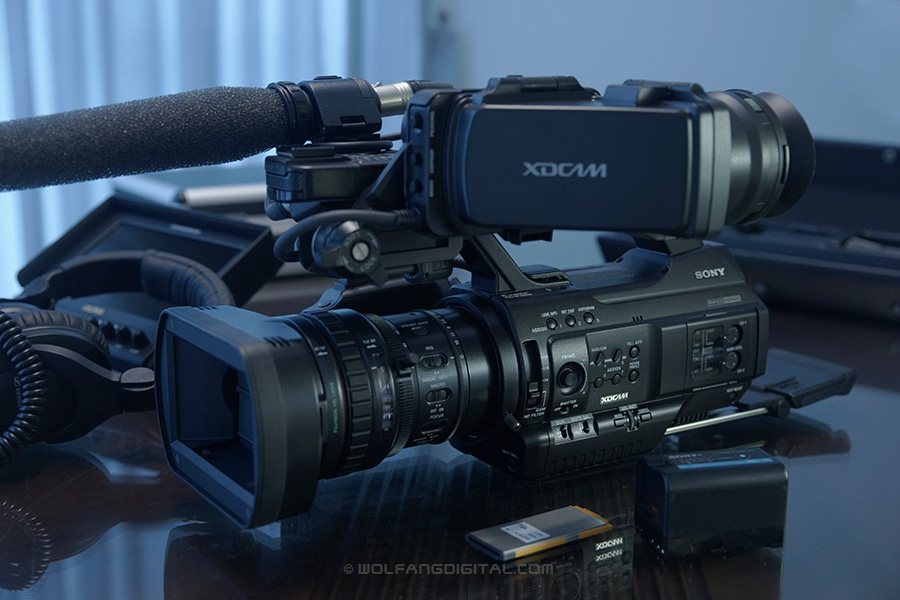 Sony PMW 300 review. Sony Malaysia let us have their new PMW-300 camcorder to use in our production. The promo film we shot with the PMW 300 was also used to in Sony Professional Camcorder Workshop in which we are also the invited speaker. We worked very closely with Tegas Broadcast and Multimedia towards preparing for that workshop, in which professionals from the broadcast industry attended.

The PMW-300 has a large articulated viewfinder which transforms into a LCD monitor. It is very robust actually, most of its body is made of metal. This contributed to the weight. Using the PMW300 for long periods without the proper form would be difficult. Which is why we shot our promotional film on a Steadicam.

The best feature of the PMW300 is its ability to shoot MPEG 4:2:2 at a respectable bitrate of 50 Mbps. This is great for visual effects jobs where chroma keying or motion tracking is involved. The viewfinder lifts up (can be detached completely) to reveal the LCD monitor with tactile buttons.

The color sub sampling of 4:2:2 allowed us to color grade footage much better than other camera footage. 4:2:2 footage is recorded directly into the SXS card. There’s no need to add a hard disk recorder like the Atomos Ninja or Samurai. Unlike DSLRs and other less capable cameras at the same price range. Here are the pros:

This is a bayonet lens with top-notch engineering. It has a very smooth 14X zoom with indications on the monitor. This reading lets you get the same zoom level every time without taking the camera away from your face.

2) Complete all in one package

It’s all there- XLR inputs, 50mbps recording, 4:2:2 color sampling, viewfinder, monitor, carry handle, shoulder mount, etc. There’s no need for extra accessories like what DSLR users are accustomed to. You can open up the box in the field and start shooting.

Shooting with PMW 300 gives you more latitude to manipulate your videos in post production especially in areas like color grading, motion tracking and chroma-keying.

Most of the PMW300 is made of metal. This camera has heft and it feels good to wrap your hands around.

The viewfinder can be flipped-up or fully detached to transform it into a monitor.

Easily and quickly find and adjust important functions like Peaking, Brightness, Contrast, Zebra and Display with large knobs on the monitor.

This is especially useful when shooting low angle shots. The foregrip angle can be altered to suit your shooting form. Adjustable fore-grip on the PMW 300 for better handheld video work.

Here are some of the cons:

Since most of its body is made of metal, the drawback is a heavy camera. The adjustable foregrip helps to compensate for some of the weight distribution.

This is a 1/3″ sensor camera. The depth of field is not so shallow for narrative film making but the F1.9 constant aperture and 14X zoom from the Fujinon lens make run and gun so much fun. The PMW-300 took its time arriving but in our opinion, is a worthy successor to the Sony EX3. The Fujinon lens gets a smoother zoom, the camera is well balanced. We can’t complain about its ergonomics. The PMW-300 looks like it was made for run and gun filming. The upgraded image acquisition features with 4:2:2 color sampling at 50 Mbps should find camera another market being used to shoot for visual effects. The footage should also stand up to intensive color grading.

For us, the only fault the PMW-300 has (keep in mind it was made for run & gun) is its weight. Get a good tripod or a Steadicam rig and you can do wonders with the camera.