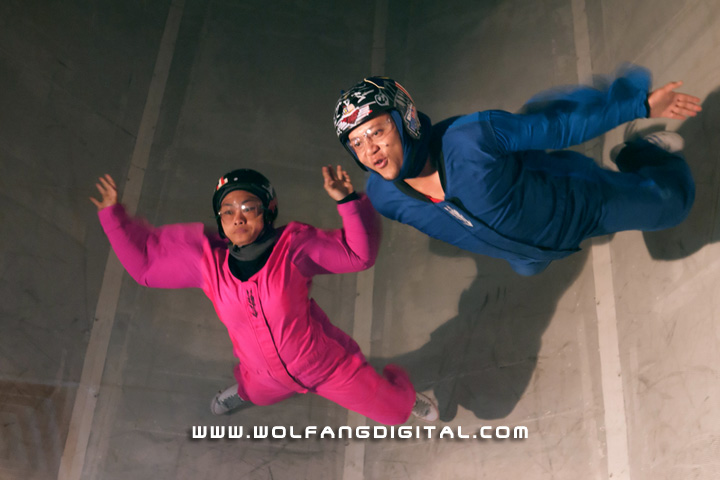 Let’s hear it from the desk jockeys out there. So many of us are living in envy of those daredevils who get to dive out of planes and live to tell about it. Skydiving is not a sport for the faint-hearted. Once we (sort of) got the hang of it, our instructor took us for a spin- literally. He swirled us up the wind tunnel chute and back down… twice. It was both a nauseating and thrilling experience, to feel the cool air rush towards your face and being flown up and down with your hand only inches from the walls!

That’s exactly what happened when we left for the highlands for Sky Ventures corporate video production. Thanks to our partner Sam Tan from The Digital Shoebox, we had the golden opportunity to be acquainted with terms like ‘freefall’, ‘wind tunnel’, ‘skydiving’, ‘193 km/h winds’ and ‘butterflies in my belly’ Sky Ventures is owned by Resorts World Genting. Sky Ventures is the only wind tunnel simulator in Asia and for their promo film, they gave us free reign of their entire operations. Sky Ventures was closed to the public for the duration of our shoot. Baron setting up to film the ‘Glory Shot’ of the instructors striding towards camera while Sam gives some pointers.

We used the Canon 7D to film the skydiving instructors as they performed advanced aerial stunts in the wind tunnel. The wind tunnel produced drafts in excess of 193 Km/h. This was more than enough to propel the human body upwards into the tunnel. Inverted antics. A SkyVenture instructor shows off a cool move by hovering upside down Both Sam and I had to suit up too, if we wanted to step into the simulator. We both chose green jumpsuits and put on our helmets. We had to wait for the wind tunnel to shut down before we could go in. The massive roar of the wind tunnel made communication impossible except by hand signals. Too narrow for a tripod, Baron goes hand-held but even so the winds were furious and try to snatch the camera.

We filmed the instructors suit up and then flung themselves into the freefall simulator. They performed a number of advanced skydiving styles for us. It was fun to watch them glide, hover and struck inverted poses. Did it look easy? To the untrained eye perhaps but being a scuba diver I knew it wasn’t.

By the time we completed our shoot, customers were already queuing up to have a go. But not so fast! We were told not to remove our jumpsuits. They had a treat for us. Two instructors showing off their skills in the wind tunnel. In the pink jumpsuit is a highly experienced lady instructor

The klaxon sounded again as our personal freeflight instructor guided both Sam and I into the wind tunnel. Yes, it’s our turn to go indoor sky diving! All we had to do was stretch our hands and lean face first into the tunnel. The rush of cold air that greet us literally lifted us off the ground. Our instructor helped us hover and it was not easy. Our legs had to remain slightly bent behind us but at a constant V shape. Bend your legs too much and you might start tumbling out of control. Our clients and SkyVenture instructors strike a pose for posterity.

We went in one at a time. Once we (sort of) got the hang of it, our instructor took us for a spin- literally. He swirled us up the wind tunnel chute and back down… twice. It was both a nauseating and thrilling experience, to feel the cool air rush towards your face and being flown up and down with your hand only inches from the walls! All in a day’s work- Shoot a film, skydive in Asia’s only freefall simulator and back home for dinner!

We left SkyVentures a little giddy but with great looking HD footage of our instructors. We even got a certificate each for attempting the sky diving adventure. We were also given a DVD video of our exploits, taken from a little video camera just outside the tunnel. What started out as a video shoot ended up in a rewarding experience.

Do you want us to produce a corporate video for you? Please fill up the form below: