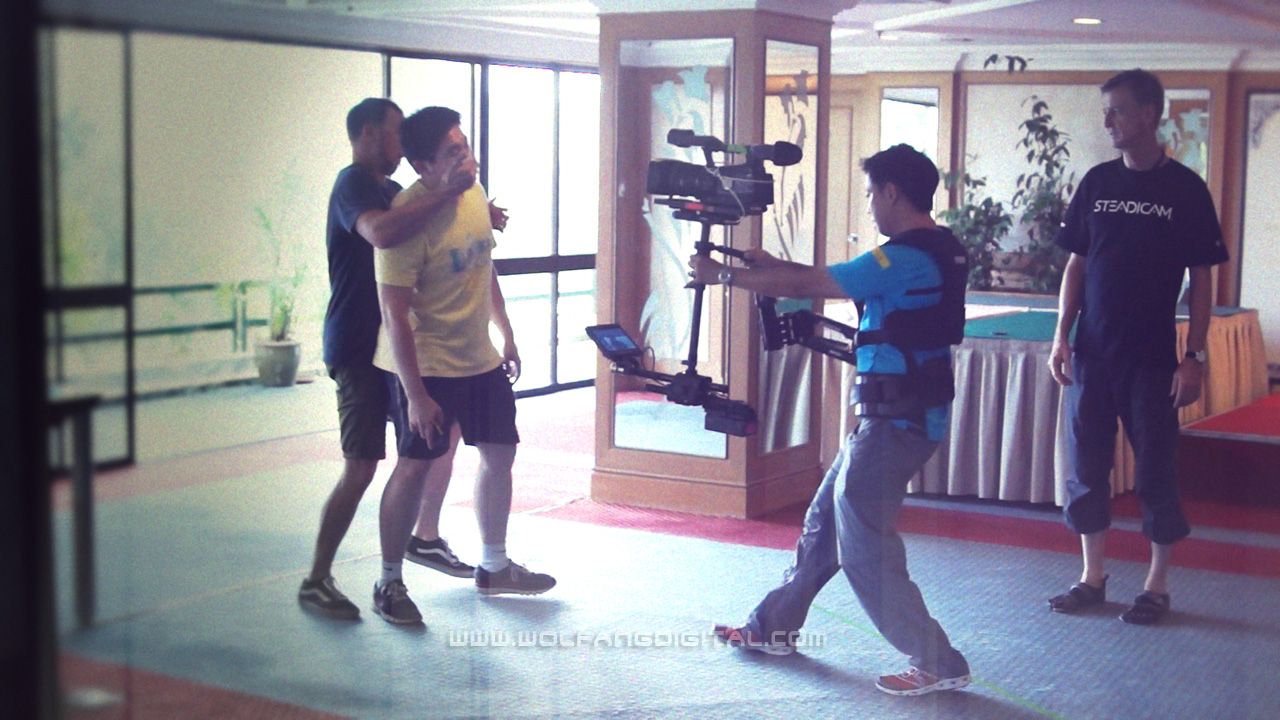 Right down to business. On the first day, before some of us could even check in, Jerry shows us the famous line dance.

The best courses out there are the ones that drive you to reinvent yourself. How many courses have you attended where on the first day you ask yourself if you can make it through the rest of the week but on the last day, wish you could do it all over again? Maneuvering in tight spaces. Robin Twaites sets up a scenario where an assassin stalks our protagonist.

I have attended many industry related courses and delivered no less. None have made me push the envelope and inspired me to better myself like the Steadicam Gold Workshop. Our first lesson starts right after lunch on first day. We were taught to walk the line. Our form was closely observed. Instructor Chris Fawcett give pointers.

If that doesn’t awe your jaded soul, consider this; how many courses have you taken where 7 instructors from 6 countries watched your every move and and taught you from first-hand experience? At the end of the course, your certificate looks like a child’s scribble pad; with all the signatures of the certifying instructors. Instructor Park observes Zhong Wei's actions on the Steadicam Archer. I am already in a vest awaiting my turn. No time is wasted.

Before you begin your journey into the seductive, exclusive, inspiring yet physically demanding profession as a Steadicam Operator and start flying your camera, there are a few things you should know. The workshop has put together an elite group of instructors chosen from an international pool of established operators. Each instructor has an outstanding career in his/her field and their advice are pearls of wisdom. The Steadicam Archer is my favorite rig. It collapses easily for storage and features the versatile G-50 arm supporting a 22 Kg payload.

Some stabilizer users proudly post up images of themselves at work. Many of them are unknowingly using the wrong techniques. Bad operating form have to be nipped at the bud before it becomes hardwired into your muscle memory system or worse still, cause permanent damage to your body. Instructor Rebecca Jennings watch as my coursemate Wan Zhong Wei and I dock the Zephyr.

Most career operators have completed at least one definitive course or workshop sometime in their lives. Attending a course of this nature simply gets the future operator off on the right path. It helps to significantly reduce trial and error, saving you time and money. Rumble in the jungle. One of the more challenging exercises held outdoors with Rebecca.

We got to train with the smaller to mid sized rigs like the Pilot, Zephyr and Archer SE to the bigger ones like the Phantom V and Ultra2. We also had the opportunity to log flight times with the new Tango. Experiences like these are invaluable. It helps newbies to make informed decisions on Steadicam purchase, available accessories and differences between rigs.

I have been using stabilizers for a few years as part of our production. I felt I was proficient with them but I never felt confident enough to feature long segments of stabilizer shots in our films, resorting instead to the confines of a slider, dolly or tripod. The most ingenious rig would be the new Steadicam Tango, which transforms the operator into a human jib.

The last workshop I attended was enlightening and liberating to say the least. Participants to the Gold Workshop get to try out almost every Steadicam rig thoroughly through exercises that are conceptualized based on real world scenarios. Stairs used to spell trouble for me- negotiating the tight spaces required agility and stamina. I do stairs very well now.

The instructors waste no time in identifying and correcting bad habits. If you have bad form, this is the place to rectify it before it does permanent damage. It is strongly advised that you attend with an open mind and a humble attitude. This is the place learn to become one with the Steadicam. Phil Balsdon is very particular about hitting your 'marks'. Here we are reenacting a scene from 'The Godfather'.

The skills and principles the instructors shared not only didn’t conflict another instructor’s but reinforced and cumulatively built upon them.

Owning a Steadicam rig is a financial accomplishment. They don’t come cheap but neither does a shiny sports car. Like a sports car, these rigs have been precision engineered to outperform the best stabilizers out there. On the first half day, the instructors break you in. You may have assumed you were doing it right and you may be in for a surprise as the instructors pull you down to earth from your lofty perch and home in on your mistakes. To paraphrase Jedi master Yoda, ‘You must unlearn what you have learned’. Jerry Holway was adamant about getting all of us into the proper form. This became the foundation. The rest of the training was built on the basics.

Amongst the generous tidbits of wisdom that Lead instructor Jerry Holway imparted on us, I hang on to these: Jerry taught us to review ever take, to go through each move in our mind and ask ourselves, ‘What would make this shot better? It would be great if…’. Long mode- not something you see everyday. The Phantom V and Ultra2 can transform into this mode.

He also told us to be sure of what we want. There seems to no lack of camera moves that are unmotivated, in TV series and even some features. Just because we can move the camera, it doesn’t mean weshould, worse still if it doesn’t contribute to the story. Garrett Brown (inventor of Steadicam), the man who started it all, shows us how it's done.

Jerry extrapolates, “Don’t think, ‘Hmmm, maybe I want it here or maybe I’ll move it there'” To reinforce his case, Jerry (all suited up with the Ultra2) lets the camera fly out and stops it just inches from my face, “BAM!, you put the camera there because you want it there.” Doorway Dolly- with a Steadicam Operator 'soft-mounted' on top, its smooth sailing all the way!

On each exercise, we trained our operating hand to become sensitive to the minute movements of the post, yet at a moment’s notice, to become firm and strong. We trained our feet to flow silently and worked our breathing. We learned to become aware of how much space our rig was occupying, how to squeeze into narrow confines, how to become one with the Steadicam. Convincing role playing sets the tone for our practice sessions, as demonstrated by the versatile Gary Collins.

Just how much has the Steadicam Gold Workshop assimilated into my life and my career?

After nailing the principles of inertia, center of gravity, drop tests, counter weights, trimming, etc., I also discovered that I could balance a rig faster. I could even tell if a stabilizer setup is well balanced just by sight alone. Garrett Brown prepares to show off the new Steadicam Tango.

I could slip into a vest at a moment’s notice. Doing the same actions more than 2 dozen times everyday made it seem as natural as breathing. Hell's Square, an operator's kyroptonite. One of the exercise we had to practice on to keep ourselves on the edge.

A week after the workshop, after all the excitement and adrenalin has subsided, I got a call from Henry of Tegas Broadcast & Multimedia (our local Steadicam distributor). He asked if I was undertaking any interesting projects and if I found the course helpful. At the time, I was using a competitor stabilizer as I haven’t gotten my Steadicam yet. Garrett Brown and Jerry Holway present me with the certificate. This marks start of my career certified Steadicam Operator.

I just completed a shoot for an international client where we recorded many dynamic scenes; the stuff that action films are made of. There was a particular stabilizer shot which had me following a group of firefighters putting out a blaze. I realized my moving shots were much more stable. The camera flew along gracefully and with a purpose. The pendular swaying of the camera was instantly replaced with graceful spatial moves. This was the same stabilizer that I had been using for years. It was not that the stabilizer decided to perform well. I told Henry that after the course, the operator simply became better!

If you are seriously considering a career as Steadicam operator, I cannot recommend this course enough.