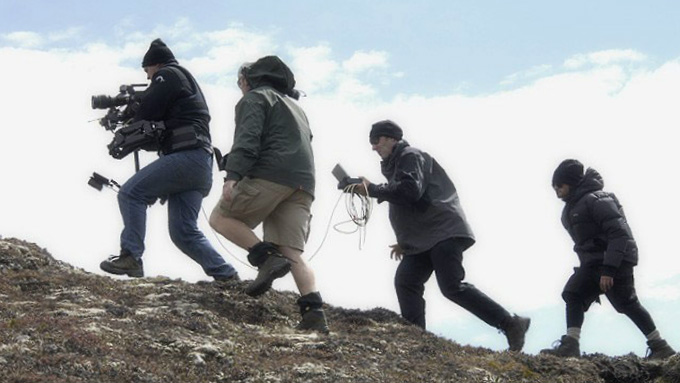 In Eurovision’s Song Contest 2009, Karsten Jacobsen zipped along on a Segway towards the stage before dismounting and running with his Steadicam rig in one smooth move. Both operator and focus puller then made a mad dash up the stage, around the lead singer (twice!) and ending with a flourish by dollying towards the guitarist.

Camera stabilizer operators are a quiet bunch. They are true artists in the film making industry and some of them have become legends. They are the most physically fit individuals in this line of work; if you know what an operator does, you’ll know he has to be in tip-top condition.

Sourced from Steadicam Operator Chris Jones blog. On the set of TV series 'The Walking Dead'

In this episode of Let’s Dance, Steadicam operator Niclas Närwall Effortlessly wields his Steadicam as if it was an extension of his body. We are witnessing a graceful ballad of man and stabilizer.

Watch how Niclas does whip pans (really fast pans) but stops his camera’s spin accurately on his next subject. This is another tricky move that requires endless practice. Throwing around his Steadicam like that only shows how much confidence Niclas has with his rig. It also grossly understates the time he has invested to master the Steadicam,

Those of us who have experience with stabilizers will note that it’s easier to operate with a wide angle lens attached. Camera shake is more noticeable when using a telephoto lens. This operator however, pulls in to a close-up of the singer while doing an arching shot, one of the most difficult maneuver.

In both instance, observe how they execute the switch from Don Juan to Missionary and reverse Missionary with ease and incredible speed. Also notice that when making tracking shots, you should never walk sideways. You should always be walking forwards or backwards.

Steadicam and Glidecam operators are acknowledged in the movies’ credits but they deserve so much more recognition in the work they do. They put us so much more closer to the action with their style and fluid control of the camera.

Check out the Film Making courses we offer!