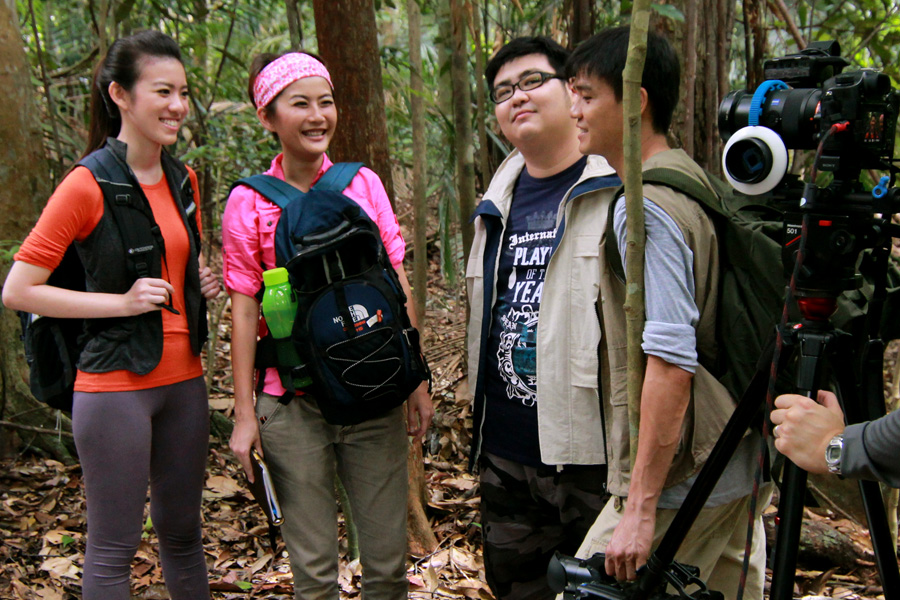 2012 is winding down and most of us are getting ready for the festivities. Not so for us. We are on location, film making for ParaBellum short film with Sony A99 and FS100. We've got a sultry cat lady. The A99 has onboard, sensor-based Optical Steady Shot, complementing the Glidecam's stabilization system

ParaBellum is a horror comedy directed by Metz Ong which follows a group of journalists in their search for a mythical flesh-eating tapir. Produced by Li Ji Hao, it stars Chythia Tan, Chai Cheng Sheong, Tommy Kuan and Ruby Yap Lee Kwan Footage of ParaBellum will only be uploaded after the first screening scheduled in late January 2013. The Sony A99 is right at home in a film making environment, in the middle of a jungle!

It was a great opportunity to have these two cameras operating side by side. The A99 is Sony’s flagship full frame camera, able to produce cinematic quality movie clips. The FS100 is a champion of low light shooting and a popular choice of independent film makers. It is an E-mount interchangeable camera which sports a Super35 sensor. Paper trail- in this arching shot, we had to use paper to mark my route around the actors. Too close or too far and I risk going off-focus.

For us, film making with Sony A99 is another testing ground to find out if the A99 is up to the challenge of a rugged set. XLR-K1M, is an XLR adapter. We don't have to record double system sound and do time consuming post synching during editing.

We found out, no surprise here, that the A99 lived up to our expectations. It’s not just about the wide dynamic range and cinematic quality of the shots it produces. I can use the viewfinder to check focus and exposure, something which other DSLRs can't offer. The EVF isolates me from the bright sun.

The A99 comes with a fantastic autofocus function. This is far beyond its competitors’ offerings. The A99’s autofocus is both precise and very (extremely) fast. I dare say quicker than most professional grade video cameras. Filming with the Sony NEX-FS100 and A99 on the set of ParaBellum and yes, we even have a cross-dresser!

Sony has even included 3 autofocus speeds in case the default is too fast to your liking. This worked our great for us when our subject moved a lot in the frame. Since the advent of DSLR film making, we faced the issue of connecting professional quality microphones to our cameras. DSLRs lack XLR connection.

The director tells me to go for a low angle, handheld feel in this tension packed scene. 3-way swivel LCD, no problems!

DSLR film makers had to resort to third party audio recorders which accepted XLR connections. This meant we had to record double system sound. The camera (which had a built-in but less than ideal mic) and audio recorder both recorded sound, resulting in two sets of audio. However, only the sound from the audio recorder will be used. Jungle fever... yep, I'm supposed to carry the Glidecam (smoothly and gracefully) through this wall of green!

Editors had to spend many hours synching up sound (from the audio recorder) with video (captured with DSLR). We don’t have to suffer this any longer. We've got a dance sequence. The FS100 captures an overhead wide shot. The A99 will be on Glidecam to do an arching shot.

The Sony XLR-K1M has two XLR inputs which lets film makers connect professional mics to it. The A99 records the sound directly from the mic and saves the editor lots of productive hours. Creating a tracking shot with the A99 mounted on the Pocket Dolly.

ParaBellum is set in a humid, mosquito infested tropical rainforest in the middle of monsoon season. We sat through at least one rainy period, covering up all the essential gear and huddling together in makeshift shelters. The incredibly flexible 3-way swivel LCD screen of the A99 makes it easy to to perform various camera moves with the Glidecam Smooth Shooter.

It is in this challenging setting that we began our shoot with both cameras, a full crew and our dear actors and actresses. The NEX-FS100 is a popular choice with independent film makers. Now there's the A99 to complement it.

We also made good use of the A99 on Glidecam Smooth Shooter for specific shots which required stable camera moves. The jungle’s uneven, slippery floor made this very difficult. Some of the locations were on a slope, adding to the challenge of make smooth shots. Part of our gear. The Sony A99 SLT fits comfortably in our kit case. An essential camera for our film making endeavors.

While performing tracking (sideways to subject) and arching (360 or around the subject) shots with the Glidecam, the 3-way swivel screen on the A99 enabled me to maintain posture to get my shot. Prior to the shoot, we did tests with both cameras to match the color profiles and bokeh. It goes without saying the A99’s Depth Of Field is shallower compared with the FS100. In fact, we had to stop down the aperture 4 times to match the A99. After the shoot,comparing the footage side by side, the A99 footage just a little soft. This is easily solved with a slight sharpening in post. The best part though, is that the A99 footage is hardly distinguishable from the FS100. It demonstrated wide latitude during color grading. I can only show the footage and completed film when the director is done with the editing. Oh dear! Here comes the shoe... try not to hit the camera!

In conclusion, the weather sealed body of the A99, its features and the cinematic videos it produces make it a worthy (if not essential) addition to the independent film maker’s equipment list.