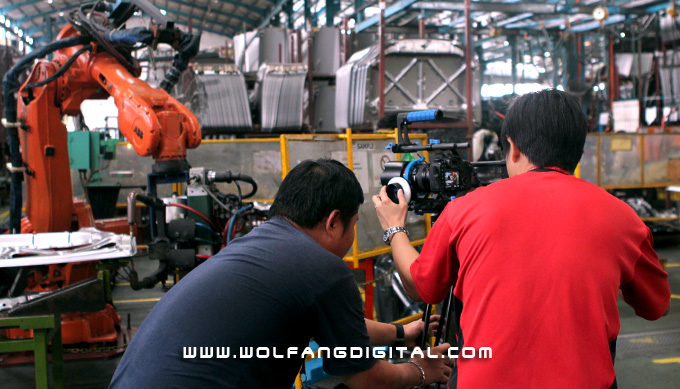 Making corporate videos is fun. We get to see interesting places which would otherwise be shielded from the layman’s eyes. This time around we were commissioned to produce a high-definition corporate film for NHF Holdings Bhd. Pureen (our producer), reviews the last shot of a welding robot with our videographer and crew.

It turned out we had only 1 day to complete a 2 day shoot. This calls for thorough planning. Obviously we had to be confident about our angles to avoid spending too much time on each scene. This was going to be an interesting corporate video production Being assigned your standard issue forklift &amp; operator for cinematography is always a good thing

NHF Holdings Bhd owns 2 state-of-the-art manufacturing plants that make replacement body parts for automobiles. After the recce of their corporate office, warehouse and both factories, we thought we would have 2 days to film. The forklift- is an added bonus. It reveals to you a unique perspective on things.

The spacious factories were home to many automated machines. In addition to the sexy vermillion hued robotic arms, the automated spray painting lines, the mighty hydraulic machines and the sexy and high-tech laser cutting machines. The mighty hydraulic press. When it presses anything, they stay pressed!

The skylight in the manufacturing lines gave us a lot of natural light to shoot with, but sunlight couldn’t reach the inner parts of the machines. In this case, were used our Benzzo LED video lights provide fill for the larger machines. One bank itself has over 900 LEDs which were sufficient to flood a large area with fill that are soft but bright. They are lightweight, making them very portable, and run on AC. Our Canon 7D HDSLR worked very well with this light. Over 900 LEDS light up the scene. The very bright and very soft Benzzo LED video light

Elevated shots were filmed from a forklift. We were assigned our very own forklift. The driver followed us around each location. All we had to do was make the request and we would be hoisted up to 30 feet into the air. One interesting machine was a giant vacuum chamber which helped fabricate vehicle headlamps and tail lamps. Each process takes 20 minutes and we were on a tight schedule so we had only 1 take. A giant robot in there that spray-paints all day, it&#39;s enclosed to prevent foreign particles from messing up its paint job

We chose our angle, lit the scene, practiced our camera moves, had a chat with the operator, telling him where to move and then we waited. As soon as the chamber was ready, we were too. We got the shot in 1 take. In this project the biggest challenge was time. Our shot list was long and we lost some time in the morning due to the heavy rain hampering some exterior scenes. The rain also reduced natural light coming through the factories’ skylight, forcing us to spend time on lighting setup. We brought our iPad2 for the recce. We shot each scene at the locations. We planned our moves, angles and lighting positions with the recce footage. The iPad2 recce footage was instrumental in helping us cut-down surplus camera angles so we could film what we absolutely needed and move on to the next scene.

Of course, having an efficient team who work closely together and who can anticipate the film director’s requirements and meet his vision are the most important asset in film making.

Do you want us to produce a video for you? Please fill up the Enquiry Form below: