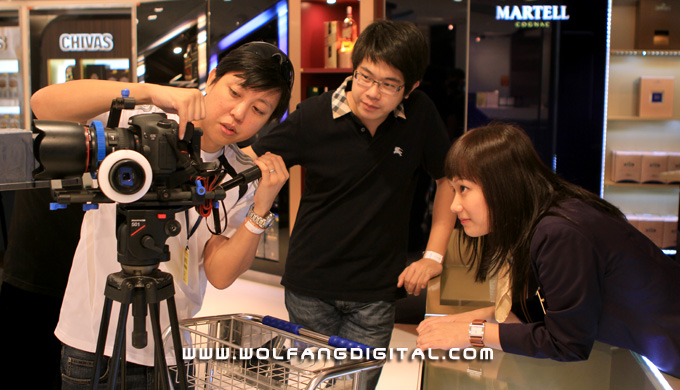 We produced a film for the owners of world famous cognac, Pernod Ricard, to showcase one of its cognac retail galleries. Martell & Co., a centuries old cognac house in (where else) Cognac, France, has two ‘experience boutique’. The first is in Hong Kong International Airport and the other, Kuala Lumpur International Airport. These boutiques are premium liquor showrooms designed to reinforce the brand’s heritage and prestige. The KLIA boutique, like its HKIA counterpart, is located at the departure area in a central location amidst the duty-free shops. The look and feel of the film had to emanate luxury and elegance. It must visually translate the feeling of warmth and style, reflecting the brand and the outlet. There was another challenge. We had to edit two separately shot footage together and present the film as one seamless product. The film shot in Hong Kong (by another production studio) and in Malaysia (shot by us) must have an identical look and feel. To do this, we made sure our White Balance was similar and consistent to the HK version. Not difficult as HK decided to use a more natural setting. The display shelves were empty when we arrived. Time to fill them full with gorgeous Martell congacs

In this corporate video production, there will be no hand-held shots. To portray Martell’s aura of elegance and luxury, tripods and dollies were an essential part of our equipment. Good dolly moves depended on a smooth surface. Although most of the departure hall’s floor was constructed of smooth marble material BUT each slab of 1 ft X 1 ft floor was interspersed with depressions. This posed an issue with making smooth camera moves. The boutique was cosy which meant setting up a Pocket Dolly in that confined space was not a possibility. This problem was compounded by customers who were browsing as we shot. An unsuspecting customer might knock our whole set-up over.

Our pedestal dolly (looks like a tripod with wheels) wasn’t much help as the space between the aisles weren’t broad enough for it to move through. We could still manage, but it took time and effort. A little slip, the dolly hits an aisle and another take wasted. At last, of all the professional equipment we brought with us, it was the luggage trolley that proved most useful. Its was narrow enough to move unhindered through the aisles. Its wheels were friction-free, giving us silky smooth moves. It can even do smooth and tight turns. In a tight spot. The filming space was very limited inside the boutique itself

We put our tripod on the trolley and had no more space (or lack thereof) issues. The sad thing about this nifty trolley was the weight! It was nice to push around, it looks compact but having to load this thing in your car is another story.

We still had to deal with the uneven floor. Every few feet we pushed the trolley, we seem the lens go ‘bump’. To minimise this means pushing the trolley precisely where you want it to go, slowly, steadily, surely and repeated takes! This sweet retail executive agreed to be in our film. We're going through her previous performances

Thankfully, the new Edius 6 has ProDad Mercalli, it’s a gem of a plugin. It stabilizes shaky footage without requiring much input from the user. Just tell Mercalli how bad your footage is and it’ll do the rest… Seriously!

We’re happy that in the end our footage and Hong Kong’s flowed perfectly. The airport trolley was a blessing to us and we were sad to have to part company with it.